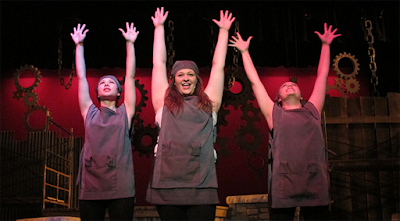 Chandler-Gilbert Community College has announced its 2016 fall performing arts season. The season kicks-off with a rendition of Steve Martin's play "Picasso at the Lapin Agile" October 13-15. The full length comedy play features the characters of Albert Einstein and Pablo Picasso who meet at a bar called the Lapin Agile in Montmarte, France. The play is set in October 8, 1904.  Both men are on the verge of an amazing idea (Einstein will publish his special theory of relativity in 1905 and Picasso will paint Les Demoiselles d'Avignon in 1907) when they find themselves at the Lapin Agile debating over the value of genius and talent while interacting with a host of other characters.

Theatrical shows in addition to “Picasso at the Lapin Agile" will include the Off-Broadway hit, “Circle of Mirror Transformation” November 17-19. “Circle of Mirror Transformation” is a play by Annie Baker, centered on drama classes at a community centre in Vermont.  The play opened Off-Broadway in 2009 and received the Obie Award for Best New American Play.

Also special for audiences will be the Comedy Improv shows September 23 and November 4 along with Jazz Night November 3.

Highlighting the Christmas season is Charles Dickens’ holiday classic “A Christmas Carol” December 1-3 along with the Winter Woods Percussion Concert December 9 followed by the dance showcase "In Motion" December 9 &10.

All shows are open to the public.

Tickets can be purchased online or at the CGCC Box Office located on the Pecos Campus. The box office window opens one hour before show time. Attendees can purchase available tickets or pick up reserved tickets from Will Call. Student prices are offered to those with a valid student ID. Doors open a half hour prior to the performance. For additional information or further assistance, please call the box office at 480-732-7343. For a full overview of the 2016 Fall Performance Arts Schedule, click here.


Posted by Chandler Gilbert Community College at 8:00 AM