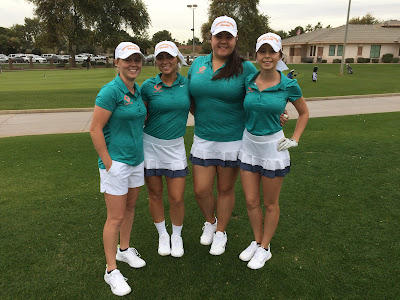 The Coyotes women’s golf team placed 3rd in their second tournament of the season on February 13th and 14th at Hillcrest Golf Course in Surprise.  The team placed third as well in their first tournament at Dobson Ranch Golf Couse in Mesa earlier this month making this a strong start for the CGCC women’s golf program.

The four-member golf team is made up of freshmen Taryn Simmons and  and returning sophomores Emily Smith, Anahi Buck, and Mariola Szmit.

At Hillcrest, Simmons led the way for the golfers shooting 89/89 for a ninth-place individual finish at 178 with Smith and Buck shooting 199 and 211 respectively.  At Dobson Ranch, Szmit finished in fourth place individually shooting an impressive two-day total of 161 while Simmons finished just two strokes shy of sixth place for the lady Coyotes.

"With the talent on this year’s team we have an excellent chance of qualifying all girls for the National Junior College tournament in Georgia in May if we continue to improve,” predicts Women’s Golf Coach, Mark Underwood.  “Mariola played in the national tournament last season; and with Taryn, Emily, and Anahi we are much more competitive this year.”

Coach Underwood’s annual goals include winning conference tournament events and medaling individuals in the top six in each tournament. He also aims to qualify CGCC for nationals and/or qualify individual girls to get them on the recruiting radar for play at the next level after completing their eligibility at CGCC.  Keep up the great work coach and team!
Posted by Chandler Gilbert Community College at 10:22 AM