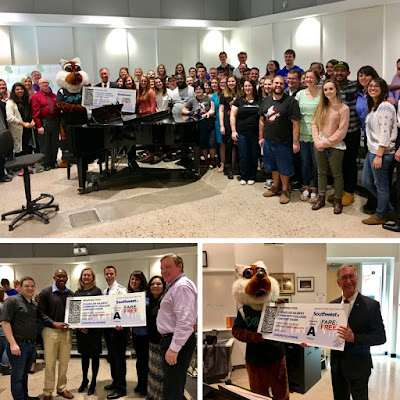 The choir was diligently rehearsing for the performance when a Southwest Airlines pilot, flight attendant, employees and members of the local media interrupted their rehearsal session for the surprise. Following remarks from Southwest Airline representatives, choir members unwrapped a jumbo-sized boarding pass revealing free airfare for each choir member to New York City. Students were shocked by the surprise and grateful to the airline for their generosity to help make their once-in-a-lifetime dream come true.

“As incredible as it was to receive this invitation,” explained Marcus Denton, Director of Choral, Vocal and Piano Music Studies at CGCC, “it was only to happen if the choir could raise the funds for the trip.  If not for the generosity of partners like Southwest Airlines this would not have been possible.  We are all very grateful for their support of these students, this program and of the performing arts.”

Last fall, the CGCC Concert Choir was invited to attend the Mid-America Productions Spring Festival Chorus at the world-famous Carnegie Hall in New York City April 3-7, 2017.  As one of only four choirs in the nation to receive an invitation, this honor arguably places CGCC among the leading concert choirs in the U.S. In addition to performing, the students will attend workshops hosted by Dr. J. Edmund Hughes, renowned choral conductor and composer and they will study one of the most revered choral works of the 20th century—John Rutter’s Requiem.

Donations for the Carnegie Hall trip are still being accepted. Anyone interested in sponsoring a student can visit www.mcccdf.org/carnegie and follow the simple instructions to make your donation.
Posted by Chandler Gilbert Community College at 10:09 AM