CGCC will nominate two students from Pecos Campus and two students from Williams Campus to the 2018 All-Arizona Community College Academic Team. These four students will receive scholarships that pays four semesters of tuition at ASU, NAU, or UofA.

In addition, the four nominees will be considered at the national level for placement into the prestigious All-USA Academic Team Scholarship.

Students can apply through the Phi Theta Kappa website (although PTK membership is not required).
The college's application deadline is Friday, November 10, 2017.

Want to learn more? Come to an application workshop on Tuesday, October 3 at one of the times and locations below.

Posted by Chandler Gilbert Community College at 1:33 PM No comments:

Empty Bowls Fundraiser Fights Hunger One Bowl at a Time 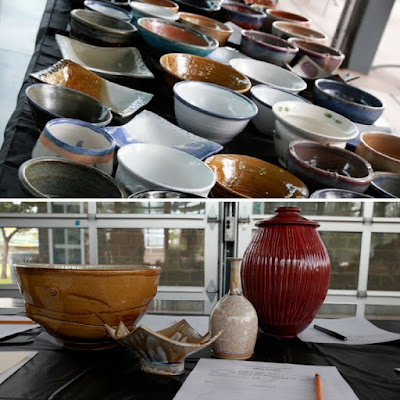 Chandler-Gilbert Community College (CGCC) has teamed up with AZCEND, formerly Chandler Christian Community Center, to fight hunger and raise money for families in need through its annual Empty Bowls Service-Learning fundraiser event. The event will be held on Tuesday, October 24 from 10:30 a.m. to 6:00 p.m. at the Student Pavilion located at the Pecos Campus.

Attendees can purchase their own hand-crafted ceramic bowls designed by CGCC Ceramics student artists for $10, and enjoy a cup of soup donated by Dilly's Deli & Liberty Market. All proceeds benefit AZCEND to feed members of the Chandler community who might otherwise go without food.

"We are grateful for the opportunity to support Empty Bowls for AZCEND through service-learning. It is a unique opportunity for Ceramics students to apply what they are learning in their courses to meet needs in the community," said Alexandra Cannell-Wendt, Service-Learning Coordinator at CGCC.

Empty Bowls at CGCC is part of a district wide fundraiser that raises funds for families in support of World Food Day (October 16), a day of action for people around the world to come together to declare their commitment to eradicate hunger. Empty Bowls raises thousands of dollars annually for local charities. Last year's event raised over $5,000 for AZCEND.

For more information about Empty Bowls contact Alexandra Wendt, Director of CGCC Service-Learning at 480-732-7069 or by email at alexandra.wendt@cgc.edu.

Posted by Chandler Gilbert Community College at 1:30 PM No comments:

In celebration of National Hispanic Heritage Month, CGCC is hosting a variety of events to celebrate the contributions of Hispanics in the community.

Each year, Americans observe National Hispanic Heritage Month from September 15 to October 15 by celebrating the histories, cultures and contributions of American citizens whose ancestors came from Spain, Mexico, the Caribbean and Central and South America. The CGCC event series is sponsored by the Hispanic Student Organization, Student Life and Leadership and Co-Curricular Programs. This year’s CGCC Hispanic Heritage events include:

Posted by Chandler Gilbert Community College at 10:22 AM No comments: 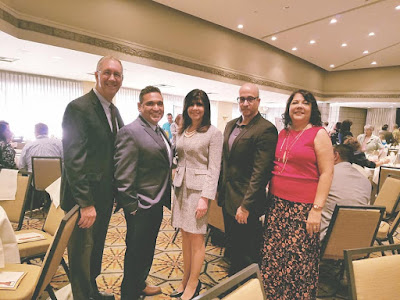 Congratulations to our very own Dr. David Muñoz for his recent recognition by The Victoria Foundation. Dr. Muñoz was honored with the Albert Ríos, Outstanding Literary/Arts award on Wednesday, September 6 during an awards ceremony at the Arizona Biltmore. The award, named after the renowned Arizona poet and long-time Arizona State University professor Alberto Ríos, recognizes the contributions of local educators who have made a significant impact on literacy and art in education.

“I am honored to receive the Alberto Ríos Outstanding Literary Award,” said Dr. Muñoz. “The work of Alberto Ríos, is truly a representation of not only the Chicano community, but also the immigrant Hispanic community living in the state of Arizona, at the beginning of the 21st century. I am humbled to receive this award from my peers and to represent Chandler-Gilbert Community College.”

Dr. Muñoz’s literary and academic career spans more than 40 years. A native of Mexico City, he began his college career at the Universidad Nacional Autónoma de Mexico in the department of Philosophy and Letters. Following graduation, he migrated to the United States in 1975, where his academic journey continued. He obtained several degrees in numerous fields including an associate degree in Theatre Arts from Southwestern College; a bachelor’s degree in Religious Studies from Grand Canyon University; two master's degrees, one in Theology from Fuller Theological Seminary, and the other in Hispanic Literature, from Arizona State University and a Ph.D. in Philosophy of Religion from Trinity Theological Seminary.

Along with his passion for education, Dr. Muñoz also has a passion for Hispanic/Chicano writing and sharing his devout culture with his readers. He is a bilingual writer, and has written in several genres, short stories, chronicles, essays, and a number of textbooks. His works include: “Insanities, Soundness, and Reality: A collection of short stories told perhaps by the same person,” “Editorial Garabatos,” “El Santo Don Patricio,” and “México de mis recuerdos,” to name a few. He also founded “Peregrinos y sus letras,” an internet bilingual magazine platform for authors from around the world to share their works.

Dr. Muñoz came to Chandler-Gilbert Community College in 1994 as an adjunct professor in religious studies and philosophy. He gained residential faculty status in 1997. Since becoming a member of the CGCC community, Dr. Muñoz has inspired thousands of students through his teachings and love of writing. Each year he introduces students in his class to the literary works of renowned Hispanic/Chicano writers such as those from Stella Pope Duarte, Sandra Cisneros
and Lucha Corpi. He also works effortlessly to bring these authors to the campus of CGCC to engage with students in dialogue about their literary contributions.

“This award gives me the opportunity to see that my work has not been in vain,” says Muñoz. “Because all us, as a community, continue to improve ourselves and will maintain our effort, to always present an accurate image of what it means to be Chicano, Mexican-American and or Hispanic, in the United States of America.”
Posted by Chandler Gilbert Community College at 10:00 AM No comments: