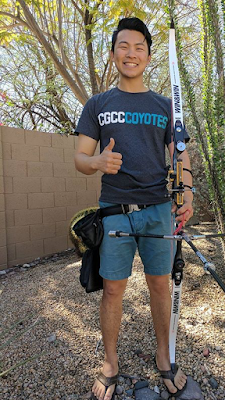 Twenty-two-year-old marketing major Nathan Yamaguchi represented Chandler-Gilbert Community College (CGCC) with precision and pride at the 2017 US Indoor National Championships placing first in the Collegiate Sr. Male Recurve division.  Nathan was one of about 140 collegiate archers competing on March 4-5 and he pulled from a quiver full of experience to come out on top again.

Nathan was eight-years-old when he first picked up a bow and arrow and quickly showed prominence on a national stage.  “I won my first National title when I was 13, and then won my second at 14,” he recounted.  “I have been a member of multiple national teams and a few Youth World Championship teams. Most recently, I won a silver medal at the Jr. World Field Championships in 2014.”  The tournament win this March is Nathan’s first National Champion title since the age of 14 and he is thrilled to have done it at CGCC.

When asked why he is so passionate about this more obscure sport, Nathan shared that “archery is great because I can control how I perform, and cannot blame anyone else for it. I am responsible for my own performance and no one else’s.”

If baseball is a game of inches, archery is a game of millimeters. Archers shoot at a 40-cm target, which is divided into 10 scoring rings at 18 m (about 60ft). At the competition, they shoot a total of 120 arrows over the course of two days with each arrow being scored out of a possible of 10 points.

Nathan recently switched to the Collegiate Sr. Male Recurve division from the Sr. Male Recurve division once he started at CGCC. This division is for those individuals who are 20 and older and attending college full time.  “My focus has been heightened in this division since I am also in school,” explained Nathan. “With less time for everything, every minute counts more.  As a result, my performance has sharpened and that is partially what I credit for this win
Posted by Chandler Gilbert Community College at 2:55 PM