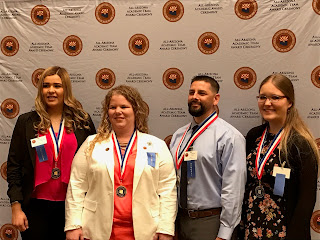 “Congratulation to Yessica, Danielle and Adrian and Rachel’s on being named to the All-Arizona Academic Team,” said William Guerriero, interim president at CGCC. “We commend you on your hard work and determination needed to receive this distinguished honor. We are honored to have you as part of the CGCC community and know you will go on to achieve great success in your academic and professional careers.”

To be considered for an All-Arizona Academic Teams, students must maintain a GPA of 3.5 or higher on a 4.0 scale, be in good academic standing, be working on an associate degree, demonstrate leadership and be involved on campus and/or volunteer in their communities.


Judging to select the recipients consisted of three rounds. In the first round, a group of local businesses, civic, education and government leaders reviewed applications and chose the recipients of the award. Only two students are selected from each college campus. The selected recipients’ applications were then forwarded to Washington, D.C., for second and third rounds of judging and scoring by representatives from various federal agencies and national education associations. Those scores were used to rank the students for first, second or third state teams. First Team members receive a $1,000 scholarship, Second Team members a $750 scholarship and Third Team members a $500 scholarship to one of Arizona’s state universities.