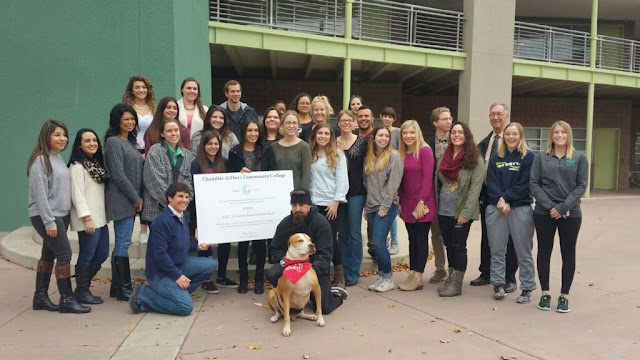 Chandler-Gilbert Community College’s (CGCC) alumni community is now more diverse than ever with the addition of its first canine graduate, Rocko the dog!  Rocko, our lovable four-legged friend, was presented with an honorary "AGEC" (A Generally Educated Canine) degree from CGCC on January 23 during Dr. Regi Munro’s Anatomy & Physiology class.

Earning a college degree was the next item on Rocko’s "bucket list." The 8-year-old Lab mix who was recently diagnosed with terminal cancer had been in and out of shelters for years.  Maricopa County Animal Care and Control (MCACC) says Rocko had been surrendered to their Mesa campus because his owner was moving and could no longer care for him. Last March, he was adopted but returned to the shelter a month later. In May, another person adopted Rocko, but once again he was surrendered — this time because he was sick.

MCACC volunteers have grown attached to the lovable Rocko who has become far more than a companion, but an inspiration.   Especially for Mike Mosteller, Rocko’s new foster parent, a retired U.S. Marine who suffers from PTSD and has found both a friend and a source of therapy in Rocko as a service dog.  “When people hear that I have taken in Rocko, they call me a hero,” shared Mike, “but it’s Rocko and dogs like him who are the real heroes.”  It is this bond with Rocko that led Mike and the MCACC family to make Rocko’s final days his best by creating a bucket list of experiences they felt he would love.

The first item on Rocko’s list was to be a real fire dog and ride on a fire engine.  Sure enough, on January 13 Rocko joined the Mesa firefighters sounding the siren and cruising through the city on a fire engine drawing the attention of the community.  Rocko’s endearing story was picked up widely by local news outlets and when people learned of his pursuit they wanted to help.

Dr. Munro reached out to the MCACC suggesting that Rocko next check off his dream to graduate from college.  As the chair of the Biological Sciences Division at CGCC, Dr. Munro saw real meaning to having Rocko join her BIO 202 Human Anatomy & Physiology class.

"It is important for me that my students know that all members of their family matter and count.  I impart on my students the importance of balance with school family, friendships, and our pets," said Dr. Munro.  "Also, I was touched by how Rocko and Mike found each other, help to heal one another and bring joy to each others’ lives.  I have many student veterans and several students who have service dogs attend school with them and help to provide emotional support and care.  I found it only fitting that for all our dogs do for us, Rocko should be able to earn an honorary degree of his own."
Dr. Munro, with the blessing of Dr. William Guerriero, interim president of CGCC, e-mailed her bucket list idea for Rocko to MCACC, sharing her reasoning and the connection she felt to his and Mike’s story.  MCACC and Rocko enthusiastically accepted the invitation and at approximately 10:30 am on January 23, 2017 Rocko took one small step for dogs, one giant leap for dog-kind.  Rocko’s tail wagged as Dr. Guerriero and Dr. Munro presented him with an "AGEC" degree in front of a classroom full of students, staff and local news outlets.

What’s next on Rocko's bucket list?  After fighting fires in Mesa and donning his cap and gown in Chandler, Rocko, a die-hard Cubs fan, hopes to run the bases at Sloan Park and lounge in the outfield.  Beyond that, Rocko, Mike and MCACC are hard at work planning the next adventure.

Want to help Rocko cross off his list?  Help him to stay healthy!  Rocko's initial tests for his diagnosis, his chemotherapy medications and doctor’s visits are being covered by Creative Contributions, a local non-profit organization helping shelter animals gain access to full service medical care. Visit www.creativecontributions.org to help Rocko and many other animals in need. 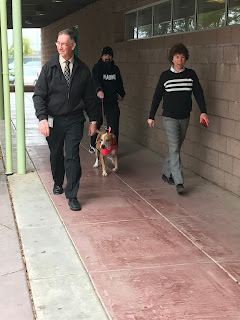 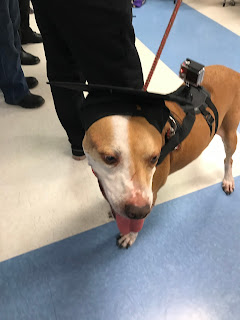 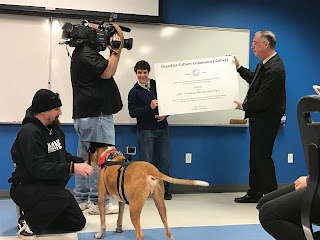 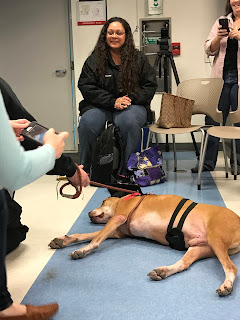 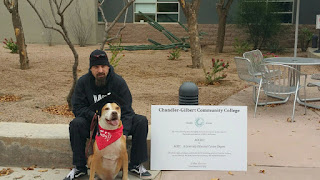