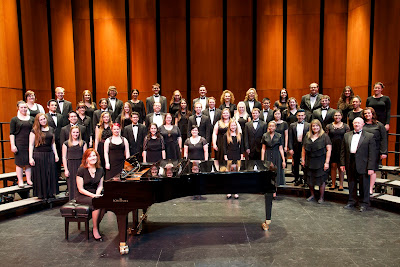 The 50-member Chandler-Gilbert Community College (CGCC) Concert Choir has been invited to the preeminent Carnegie Hall in New York City to attend the Mid-America Productions Spring Festival Chorus April 3-7, 2017. This milestone includes participation in musical clinics and a live performance on the historic stage. As one of only four choirs in the nation to receive an invitation, this honor arguably places CGCC among the leading concert choirs in the U.S.

“Beyond the much-deserved recognition and the thrill of traveling to New York, the educational component of this experience will be invaluable to music students,” expressed Marcus Denton, Director of Choral, Vocal and Piano Music Studies at CGCC. “It is a three-day residential clinic with Dr. J. Edmund Hughes (nationally known choral conductor and composer, and former director of the CGCC Concert Choir), studying one of the most revered choral works of the 20th century--John Rutter's Requiem, and culminating in its performance on the Carnegie Hall stage.”

For this reason, Denton, the CGCC Performing Arts Department, CGCC and the choir members themselves are actively seeking student sponsors and other donors to help make this dream a reality. The total cost of the trip is estimated at $72,000, or $1,800 per student, including travel, event registration, and hotel. Each student will contribute $750, or $30,000 total, toward that cost, and the college, with support from the Maricopa Community Colleges Foundation, is working to raise the balance of $42,000.  The reality is that this trip and performance will truly be life-changing for our students.

Denton has been crafting the performance quality of the CGCC Concert Choir for years and he understands that it takes a village, and determination, to build national recognition. “Many of the students who are going were part of previous Concert Choirs at CGCC, and have been part of the legacy that led up to the invitation,” shared Denton.  “Many are new and have come to us as graduates from our very effective surrounding valley high school programs, and have already contributed tremendous talent from Day 1 on this campus. Together, we have seen CGCC Choir become one of the premiere collegiate choral groups in Arizona and beyond, known for its quality and high level of musicianship.”

By sponsoring a student, one not only provides a “life-changing” experience but it is also a key contribution to the growing CGCC tradition of fine music making and excellence in the performing arts.  Anyone interested in sponsoring a student can visit www.mcccdf.org/carnegie and follow the simple instructions to make your donation.
Posted by Chandler Gilbert Community College at 4:59 PM