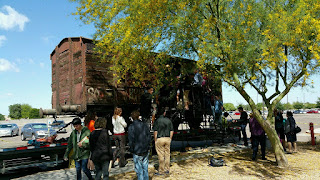 Students and members of the community gathered at Chandler-Gilbert Community College's Pecos Campus on March 30 to commemorate the Holocaust and learn more about issues of tolerance, forgiveness and survival. Attendees were able to view a Holocaust-era rail car and listen to first-hand accounts of survivors in an exhibit provided by the East Valley Jewish Community Center and the City of Chandler.

The 11-ton, 33-foot-long rail car on display was the type and kind that Nazi Germany used to transport Holocaust victims to labor and death camps during World War II. Holocaust survivor George Kalman was also present at the event to share his personal story of survival with students and visitors. Mr. Kalman was only 9-years-old when his family received orders from the Nazis to leave their Hungarian village on a rail car in 1944. 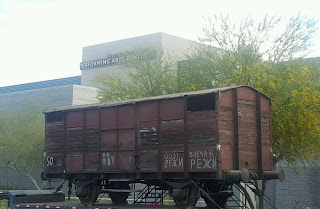 The event drew hundreds of students, members of the community, city officials and many of the Valley's television stations who covered the event for their evening newscasts. Click a link below to view the television segments.

Posted by Chandler Gilbert Community College at 10:11 AM