CGCC Students Rise Up To End Violence Against Women

2016 ‘One Billion Rising’ events continue the revolution for systematic change 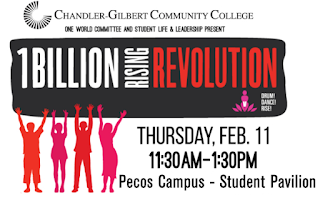 Students at Chandler Gilbert Community College (CGCC) are once again joining the global One Billion Rising campaign through campus events designed to raise awareness of and put an end to violence against women.  Events will take place at the Williams and Pecos campuses and will offer a forum for self-expression, spirited dialogue and solidarity in achieving a new consciousness – where violence against women is resisted until it is unthinkable.

One Billion Rising, a global campaign, is the biggest mass action to end violence against women in human history.  The campaign began as a call to action in 2012 based on the staggering statistic that 1 in 3 women on the planet will be beaten or raped during her lifetime. With the world population at 7 billion, this adds up to more than ONE BILLION WOMEN AND GIRLS. The 2016 campaign will escalate the call for revolution, the 2015 mantra.  This escalation will focus on the most marginalized women and girls in order to achieve long-lasting change.

The event at Williams Campus will take place on Wednesday February 10th and will have a survivor story, a speaker from Streetlight (anti-sex trafficking organization), a spoken word poet (Roanna Shebala) and then students will lead others in the dance Break the Chain. The event at Pecos Campus on Thursday, February 11th will include Kawambe Omowale, (African drumming and dance) survivor story, a speaker from Streetlight, spoken word poetry and the same student-led dance.  Both events will include valentines making and videotaped statements from students about a revolution to stop violence against women and girls. There will also be area agency tables/booths with information and resources.

Dance and the arts are an integral part of the One Billion Rising campaign.  Dancing in particular is a common thread through all events due to its collective, connective power to bring people together and how it effectively amplifies the urgency and complexity of this important issue.  When the campaign was first created in 2012, choreographer Debbie Allen gifted her choreography for “Break The Chain” to One Billion Rising. Since then, activists have been doing the original dance and interpreting it; making it their own. Others have created their own new choreography and incorporated into their events.
Posted by Chandler Gilbert Community College at 8:00 AM